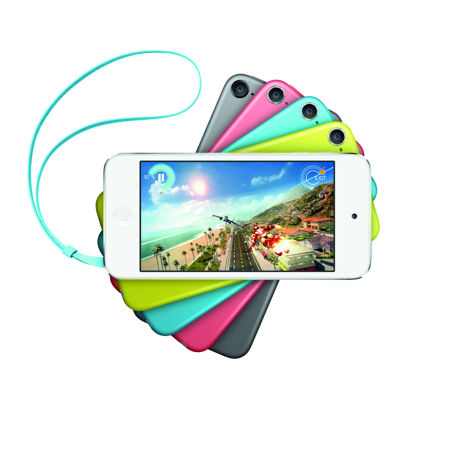 I would like to think that the world is currently looking forward to see just what the next iteration of the iPhone would be, with many rumors surrounding the iPhone 6 which will purportedly arrive with a larger display than the existing flagship, the iPhone 5s. However, I think Apple caught many of us off guard with one of their more recent releases that might be full of fanfare half a decade ago, but in this day and age? It would be largely forgotten. I am referring to a niche market of portable media players that no longer command a large presence in the mobile device market that has since been overtaken by tablets and smartphones alike, but Apple has faith that there is room for the new 16GB iPod touch to thrive.

With the announcement of their 16GB iPod touch, at the very least you can be sure that it will come in a range of vibrant colors to capture your attention – where you can choose from pink, yellow, blue, silver, space gray and (PRODUCT) RED shades. Retailing for $199 a pop, it will feature a 5 megapixel iSight camera that can handle 1080p HD video recording with aplomb, while delivering brilliant visuals thanks to its 4-inch Retina display. Something tells me with so many people used to large displays, 4” are going to look positively archaic. Ah well, at least the A5 processor from Apple will keep things running smoothly from within, accompanied by a FaceTime camera.

Arriving in the now signature ultra-thin and light anodized aluminum design, the 16GB iPod touch will keep company the 32GB and 64GB iPod touch models which have received price cuts of their own, retailing for $249 and $299, respectively. Apart from that, it will also arrive with iOS 7 as the mobile operating system of choice, and I am quite sure that many of us would like to see iOS 8 hit this model as well when it arrives later this fall.