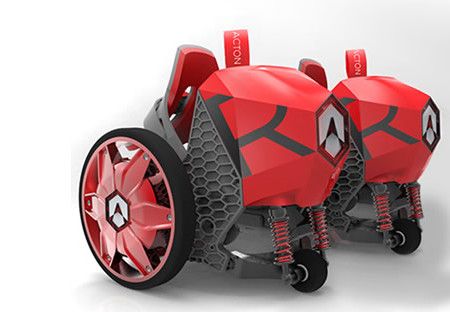 So, you have decided to take the step to shed some weight around the waist through some kinds of exercise, but the thing is, you have not quite settled on the kind of exercise in which you think would suit you. Having said that, have you considered skating in the first place? It is definitely a unique way of fighting against the flab, where you will be able to sweat it out with minimal impact on your joints and at the same time, are able to get around from one place to another in double quick time – at least faster than when you are walking, of course. Well, here is a pair of skates that will definitely change the way you look at skates ever again – the $699.95 12 MPH Electric Skates, of course.

These happen to be motorized electric roller skates which, as its name suggests, are able to propel a wearer at up to 12 mph. The two sets of step-in footplates secure most types of footwear with strap bindings that are similar in style to those on snowboard boots, allowing it to accommodate both small and large feet. As long as you do not tip the scales at more than 275 lbs., each skate’s twin 6″-diam. wheels alongside its 50-watt motor that has been integrated into its fiber-reinforced nylon frame will be able to help you get around in style. Tilting forward on the toes will accelerate, while tilting back on the heel will brake gently, and I do not think you will be able to perform any kind of stunts on these puppies.