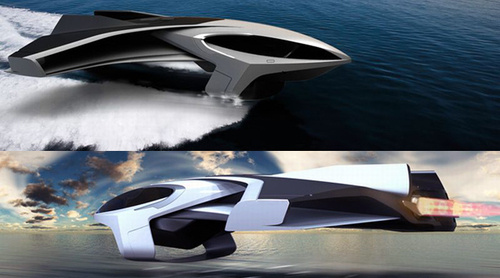 This particular vehicle may look futuristic, but this concept vehicle is actually based on vehicles of the past rather than the future.
This is an ekranoplan (pronounced ee-cran-o-plan not ee-cran-o-plane) which is a sea-based vehicle that can move at extraordinarily fast speeds. You can see one after the jump on video. As you can see, their increased speed can somehow lift the craft a few feet off the ground with something called the ground effect. So there really is nothing futuristic about this particular concept sketch, really.
The ekranoplan originated in Scandinavia, and a Soviet engineer named Rostislav Alexeev at the Central Hydrofoil Design Bureau created some big ones, like the type in the video below. In fact, one of the largest ekranoplans was a “Caspian Sea Monster”, and it was a 550 ton vehicle that can travel up to 66 feet over the water at 460 miles per hour.
You’ll note that when these things move, they look like airplanes on the water. I’m going to assume that when the ekranoplan slows down, the hovering end slowly descends in the water.
Of course, the future is probably sinking for this particular EkranoYacht, which I believe is it’s official name. It probably very expensive to make, so my Source says.